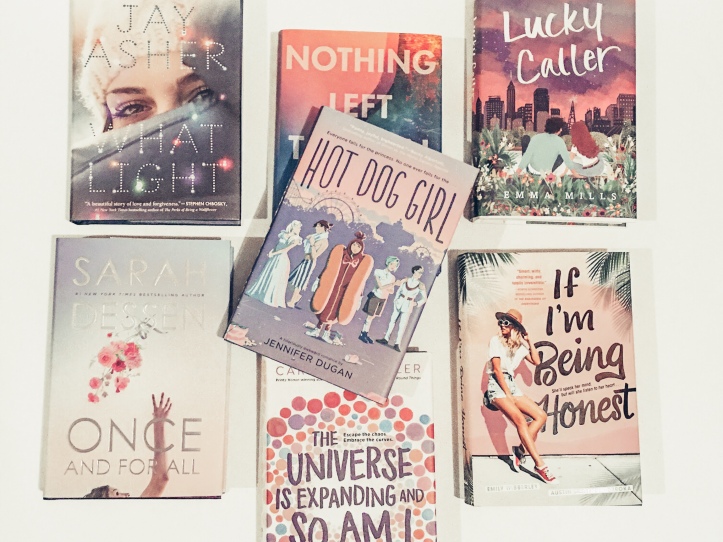 “Elouise (Lou) Parker is determined to have the absolute best, most impossibly epic summer of her life. There are just a few things standing in her way:

* She’s landed a job at Magic Castle Playland . . . as a giant dancing hot dog.
* Her crush, the dreamy Diving Pirate Nick, already has a girlfriend, who is literally the Princess of the park. But Lou’s never liked anyone, guy or otherwise, this much before, and now she wants a chance at her own happily ever after.
* Her best friend, Seeley, the carousel operator, who’s always been up for anything, suddenly isn’t when it comes to Lou’s quest to set her up with the perfect girl or Lou’s scheme to get close to Nick.
* And it turns out that this will be their last summer at Magic Castle Playland–ever–unless she can find a way to stop it from closing.

I really liked the setting of this book, which is a small town amusement park on the verge of closing. I loved that Elouise was a hot dog of all things for her summer job, and the element of the characters all having some sort of costume or amusement park job was super cute. The park is closing after this summer, which is the focal point of the plot, but the characters’ families and love triangles add more subplot.

Lou’s dad was great. In a lot of YA books the parents aren’t present, but he was, and he’s a good dad just trying his best.

I like that it’s a queer rom-com, and it’s pretty rare that we see bisexuality in YA.

Eric Smith mentioned that this is one of his favorite books, and I love him, so I believed that I would love it, too. It just didn’t live up to the hype for me.

I did not like the main character at all. I thought she was pretty fickle, wishy-washy, and kind of dramatic at times. That being said, I think I was supposed to dislike her. So, well done, author?

This was almost a DNF for me, but because I know my students will actually really love it, I powered through, and I am thankful I did. I did like it more as the story went on.

Follow Give Me Coffee and Books on WordPress.com
Join 299 other followers