Summer Blog Promo Tour|My Review of the Books Becky Chose for Me!

This week I am super excited to share with everyone (and Becky!) which books I read and reviewed from the TBR list she came up for me a few weeks ago! You can see the original list and my initial thoughts here. You can also see my original picks for Becky here! I can’t wait to see which of the books she read and if she liked it!

As you can see on my Try a Chapter Tag post, I had a hard time narrowing it down to just one book to review because I liked 4/5 SO much. Illuminae and Splintered both started off SUPER strong for me, but for whatever reason it has taken me a while to finish them, so I decided to share my thoughts on TWO of the books she chose for me, The Seven Husbands of Evelyn Hugo and Caraval.

Both of these were incredible and I give them both 5/5 stars. I want more of each of them, and thankfully Caraval has a sequel I plan to read very soon. Becky did such a good job of picking books that I would love! My full reviews can be found below: 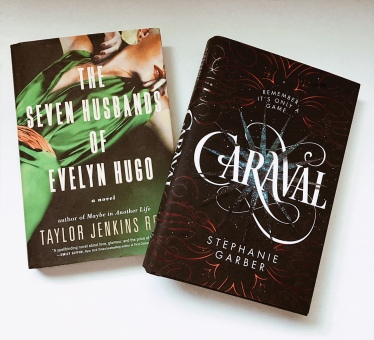 “Evelyn Hugo is finally ready to tell the truth about her glamorous and scandalous life. But when she chooses unknown magazine reporter Monique Grant for the job, no one in the journalism community is more astounded than Monique herself. Why her? Why now?

Monique is not exactly on top of the world. Her husband, David, has left her, and her career has stagnated. Regardless of why Evelyn has chosen her to write her biography, Monique is determined to use this opportunity to jumpstart her career.

Summoned to Evelyn’s Upper East Side apartment, Monique listens as Evelyn unfurls her story: from making her way to Los Angeles in the 1950s to her decision to leave show business in the late 80s, and, of course, the seven husbands along the way. As Evelyn’s life unfolds through the decades—revealing a ruthless ambition, an unexpected friendship, and a great forbidden love—Monique begins to feel a very a real connection to the actress. But as Evelyn’s story catches up with the present, it becomes clear that her life intersects with Monique’s own in tragic and irreversible ways.” – Goodreads

Honestly, everything. This book was SO good. It’s an adult Historical Fiction novel about an older actress who is ready to finally open up about her life, her many husbands, and all of her secrets. This book has been getting so much hype, and it deserves it all!

The writing is addictive, and the format is really interesting, as it’s told in both present day typical story format as well as flashbacks from the past, present day interviews, and magazine clippings from the past.

Evelyn is perfect in my opinion. If you read the story you’ll realize she’s done some pretty terrible things to people in her life, but I was always able to forgive her and understand what her motivation was.

The characters. Some you’ll love and some you’ll despise, which makes for a really good book.

All of the glamor. Evelyn was beautiful and lived a luxurious life with movie awards shows, premiers, and many houses and husbands. I loved it.

Somewhat spoiler alert: this book has a really interesting look at the LGBTQ community decades ago, and what life was like for members who have acquired fame and had to keep it hidden.

Not much, but maybe seven husbands was too many husbands.

“Remember, it’s only a game…Scarlett Dragna has never left the tiny island where she and her sister, Tella, live with their powerful, and cruel, father. Now Scarlett’s father has arranged a marriage for her, and Scarlett thinks her dreams of seeing Caraval—the faraway, once-a-year performance where the audience participates in the show—are over.

But this year, Scarlett’s long-dreamt-of invitation finally arrives. With the help of a mysterious sailor, Tella whisks Scarlett away to the show. Only, as soon as they arrive, Tella is kidnapped by Caraval’s mastermind organizer, Legend. It turns out that this season’s Caraval revolves around Tella, and whoever finds her first is the winner.

Scarlett has been told that everything that happens during Caraval is only an elaborate performance. Nevertheless she becomes enmeshed in a game of love, heartbreak, and magic. And whether Caraval is real or not, Scarlett must find Tella before the five nights of the game are over or a dangerous domino effect of consequences will be set off, and her beloved sister will disappear forever.

Welcome, welcome to Caraval…beware of getting swept too far away.” – Goodreads

Holy cow. How did it take me so long to get around to this book? It came in one of my Owlcrate boxes well over a year ago, and even though I recommended it to people based on its reviews, I never picked it up. I have not been on much of a fantasy kick lately, but I am definitely kicking myself for waiting so long to read this one.

While everyone seems to LOVE the sequel, many people say you’ll either love or hate Caraval. I loved it and cannot wait to read Legendary, its sequel.

This book had it all: a love story, a story of two sisters, an abusive father, magic, mystery, thrill and excitement. I wanted so badly to be inside Caraval playing along.

The balance of good and evil characters and those who you really aren’t sure about yet was so great. For whatever reason I really wanted Dante’s part to be bigger and for him not to be evil, and I don’t know why.

I read this book in one day and am kind of obsessed with it now.

This isn’t a real criticism, but I couldn’t help but notice that Scarlett didn’t eat ONE time during the entire story.